Nithiin to play a guest role in Mega hero's movie 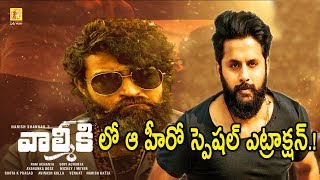 Mega hero Varun Tej’s upcoming movie, 'Valmiki' is coming out as the remake of Kollywood super hit film, 'Jigarthanda'. Atharvaa Murali is playing a crucial role in this film.
Harish Shankar is helming this project which is slated to hit the theatres on September 20. Harish Shankar is leaving no stone unturned in roping in stars to play cameos in this film. It is known that star director Sukumar is playing a guest role in this movie. As per the latest reports, young hero Nithiin is onboard to make a guest appearance in the film. Apparently, the duo is super excited to be a part of the film and the audience is also eager to watch the flick.
Mrunalini Ravi and Pooja Hegde are playing the female lead roles in this movie. Touted to be a gangster drama, 14 Reels Plus banner is bankrolling this project.
Share
Popular Stories