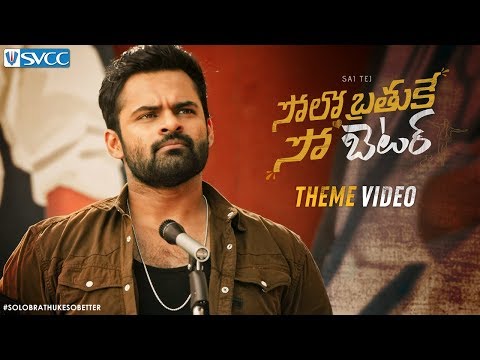 Mega hero Sai Dharam Tej whose 'Prathi Roju Pandaage' became a hit is all set to test his luck with his next project titled as 'Solo Brathuke So Better'. Subbu is wielding the megaphone for this project.

Nabha Natesh is playing the love interest of Sai Dharam Tej in this movie. Today, the makers have unveiled the theme video of the film. The 1 minute 13 seconds video featured Sai Dharam Tej in a stylish look giving a speech that 'Being Solo' should be their Moto, Freedom will be their agenda and 'Solo Brathuke So Better' is their slogan. The theme video increased the buzz around the film and hinted a perfect youthful entertainer.

BVSN Prasad under Sri Venkateswara Cine Chitra LLP is pooling resources for this project. SS Thaman is scoring music for this film which is scheduled to get released on May 1st 2020.