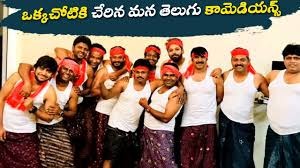 Comedian Satya, made his name famous with his appearance in Telugu adult-comedy shoe 'Jabardasth', and made his way into film industry. With few good films like Swamy Ra Ra in his bag, he kept himself noticed to audience with his appearances in shows & skits. Recent film 'Amar Akbar Antony', though had a disaster result, has shed some light onto Satya's timing & dialects.

Although qualms this recognition, he stated that he makes his mark lasting with his upcoming film under Banner 'Flying Colours'. Himself, with few other comedians from 'Jabardasth' have pooled to make a film, directed by another noted Comedian 'Sreenivas Reddy'

"All the comedians have a funny bone in them and people will laugh out to what they, even if it was something normal and ordinary. But, this film something more drama than comedy, and this will bring us the respect every comedian deserves and expect from everyone" says Satya.