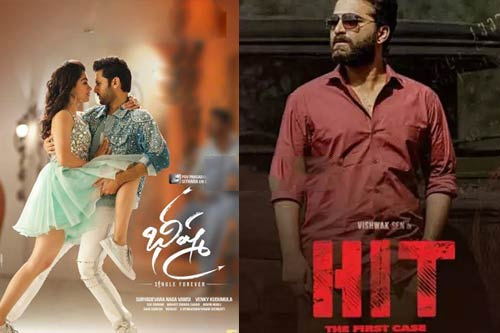 Viswaksen came up with an exciting film HIT on Friday. The film opened to good reports and numbers on the release day. The film made an amount of 1 crore rupees on the first day of the release. Now, the makers are expecting profits in the next few days. The film got the hit status already. Apart from HIT, Bheeshma is also performing well.
Nithiin starrer also tasted profits in both the Telugu states. The film is surely a game-changer for Nithiin right now. The family audiences are enjoying the film now. The film already crossed 25 crore mark.
Dulquer Salmaan's Kanulu Kanulu Dochayante has got entertaining content but the weak promotions are huge minus for the film. The film is not putting a great show at the theatres right now.
Sankranthi releases Ala Vaikunthapurramuloo and Sarileru Neekevvaru crossed 50 days of theatrical run.
Share
Popular Stories