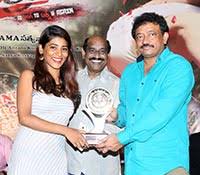 'Fidaa' fame Gayatri Gupta has already made it into the news with controversial confessions in various interviews especially when the casting couch issue was on a full swing, she was one of the actresses who was always seen in the debates.
Now, the trailer of her upcoming movie 'Sita On The Road' is out and she is getting interviewed again. Talking in such interviews, she revealed an incident where director Ram Gopal Varma blocked her on his phone. Gayatri Gupta worked with RGV for Ice Cream 2' movie. She claimed that she has realized that the film is going to be a biscuit when she was dubbing for it. After the film released and ended up as a clear disaster, the actress apparently kept sending messages to RGV for half an hour scolding him for making such a senseless film.
The vexed director has simply blocked her on his phone. However, Gayatri still praised his commitment to the sets and his multitasking skills.
Share
Popular Stories