'Kaappaan' turns as a profitable venture 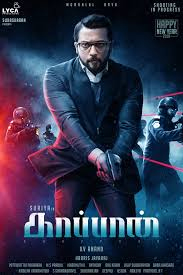 Suriya starrer 'Kaappaan' recently hit the theatres and has been receiving a positive response from the audience. Though the movie failed to score big in the Telugu States, 'Kaappaan' has been making decent numbers at the Kollywood box office.
The movie has entered the second week of its run and the collections are still steady. As Mohan Lal played an extended cameo in this film, the movie is scoring decently well in Kerala and UAE territories.  After 10 days of its run, the film became a super hit. The movie has reportedly turned into a profitable venture by Saturday. The gross collections in Tamil Nadu are 50Cr and the film earned 5.3 Cr as of Sunday in Chennai itself. On the other hand, the collections in Andhra Pradesh and Telangana are extremely disappointing. The film had a poor opening in overseas as well.
Here are the area wise collections of 'Kaappaan':
Tamil Nadu : ~Rs.47.5 Cr to Rs 51Cr
Kerala: Rs. 7.5 Cr
AP/TG: Rs. 7Cr to 8.5 CR
Karnataka: Rs. 4.5 Cr
ROI: Rs.2 Cr
Share
Popular Stories