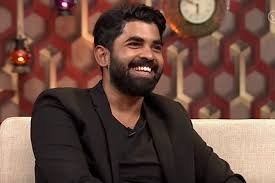 As soon as we hear the name of SS Rajamouli, the instant thing that hits our mind is huge sets, mammoth budget, folktales, kingdoms, and all the high scale stuff.

But it seems that the legendary director's son SS Karthikeya has contrasting taste in making films.

It is known that Karthikeya has entered into production with his maiden flick Akash Vani. The first look poster of the film was released a few days ago and it raised the curiosity among the audience on what the film is all about.

Apparently, Karthikeya is planning to wrap this project under Rs. 5 crores only. If the film gears up for release, it will definitely make a pre-release business worth Rs. 15 crores considering the stardom of Rajamouli.

Hence, this is a smart move by Karthikeya to land in profits zone even before the release. Directed by a protege of Rajamouli, Ashwin Gangaraju, Aakash Vani will feature all newcomers as the leads. Keeravani's son Kala Bhairava s debuting as a music director with this film.
Share
Popular Stories