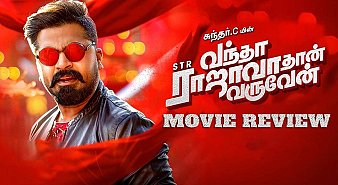 Actor Simbu, who likes to be on the headlines for all the wrong reasons, has been doing a very few films over the past couple of years. Last year, he was seen in Mani Ratnam's crime drama Chekka Chivantha Vaanam (Nawab in Telugu) but as it is a multi starrer, he didn't get enough screen time.
After a long time, he came up with a commercial entertainer to please his fans. Titled as Vantha Rajavathaan Varuven, this film is directed by Sundar C and is an official remake of super hit Telugu film Atharintiki Daaredi. The film released all over today amidst high expectations.
But unfortunately, though made as a faithful remake, the film couldn't create the magic done by the Pawan Kalyan starrer. Many critics and audience felt that it has over the top comedy sequences and melodramatic sequences, making it a regular masala fare. Anyways, we have to wait until the weekend to know the fate of the film at the box office.
Share
Popular Stories