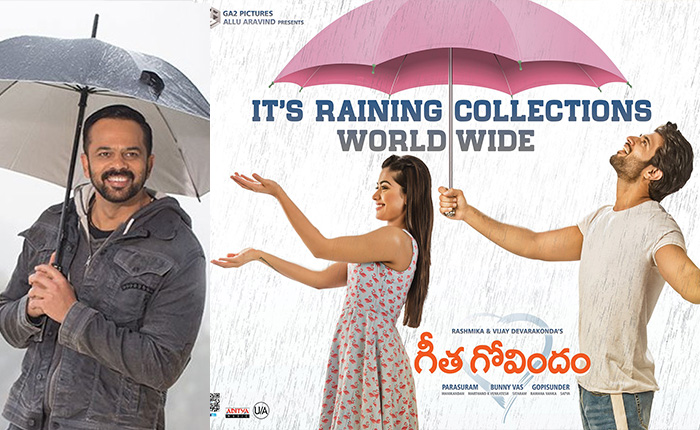 Most of Tollywood young sensation Vijay Devarakonda's movies are now going to get remade in Hindi. It is known that his blockbuster film 'Arjun Reddy' recently got remade in Hindi as 'Kabir Singh'. Starring Shahid Kapoor, the movie went on to became a blockbuster.
Recently, Karan Johar has bagged the remake rights of Vijay's recent outing 'Dear Comrade'. As the movie got an underwhelming response from the audience, we have to wait and see if Karan Johar will go ahead with the remake or not. On the other hand, Vijay Devarakonda's 2018 released super hit film 'Geetha Govindam' is also going to get remade in Hindi and director Rohit Shetty has bought the remake rights. Rohit Shetty who previously remade NTR's 'Temper' as 'Simmba' is going to helm the hindi version of 'Geetha Govindam'. Currently Rohit Shetty is busy with his upcoming movie 'Suryavanshi' with Akshay Kumar. After wrapping up this project, he will kick start the shooting of 'Geetha Govindam' remake.
We can say that Vijay Devarakonda and Rashmika Mandanna's beautiful chemistry became the major reasons behind the super hit of the film. We have to wait and see which actors are going to reprise their roles in the remake version.
Share
Popular Stories